Warning: "continue" targeting switch is equivalent to "break". Did you mean to use "continue 2"? in /homepages/33/d434427848/htdocs/clickandbuilds/RusticoRenovation/wp-content/plugins/page-views-count/admin/admin-interface.php on line 356

Warning: session_start(): Cannot start session when headers already sent in /homepages/33/d434427848/htdocs/clickandbuilds/RusticoRenovation/wp-content/plugins/srs-simple-hits-counter/SRS_Simple_Hits_Counter.php on line 18
 I love it when a plan comes together … – Rustico Renovation

I want to give you an idea of the scale of project we have taken on – not a huge project by many standards, but there is certainly enough work required to cover all areas of a house renovation short of demolishing and rebuilding.

Our house is a two bedroom, two storey stone farmhouse with no bathroom, a kitchen (cucina) which is really just a bare room with a cast iron wood burning stove connected to a partially demolished chimney, an outside store room (cantina), two wood stores (legnaia) attached to the house, a detached hay barn (fienile) and a wood fired outside bread oven (forno di legna) – all in all around 160m2 of potential.

We are fortunate in that where our house is in the hinterland of central Liguria, the area is classified at the lowest risk for seismic activity in Italy and as such, we do not need to incorporate structural alterations to resist earthquakes – every area varies, so it is very important you seek the advice of experts in your chosen area.

Structurally, the building is ok – the roof is intact and doesn’t leak, the walls are straight (500mm thick stone, literally stuck together with clay – and after 150 years are still standing), the fienile needs a fair amount of work as three of the sides are only partly enclosed, and the roof could do with rebuilding. The two wood stores need the floors raising off the current soil/stone base, and the ceilings also need to be raised, as any change of use of formerly inhabitable space must meet current height regulations and this means the ceilings need to be 2.7m high as a minimum (ours are currently around 2.2m). Existing habitable rooms – ie. the kitchen and two bedrooms can remain as they are at 2.3m as they already exist on the registered plans in the Comune. We need to strengthen the rear bedroom floor above the cantina (which will become the bathroom to the main bedroom) as it is a little ‘spongey’ and will be expected to support the weight of a bath full of water and a relaxing renovator!

The staircase needs to be rebuilt – the original staircase would have been outside, but sometime ago in the 1970’s, a ‘new’ internal staircase was built – unfortunately due to space restrictions, this resulted in a very steep set of concrete steps between the kitchen and the cantina akin to an extremely sturdy ladder! We will be replacing all the windows and doors (and inserting a couple of extra ones – our local Comune planners are very understanding), re-wiring everything, adding plumbing throughout the house as there currently is none,  three new chimneys (we have chosen to stick with the original and more natural use of wood instead of gas for heating as we have a couple of woods full of fuel just waiting to be cut, and nothing beats the smell of a log burning fire on a cold winter’s night!)  We will build a new extension to connect the house and the fienile, creating a ground floor bathroom … and finally a bit of experimenting with ‘free’ water heating – via the wood fired stove in winter and the sun in summer.

Crikey, it is a bigger project than I thought – I think a few of these will be in order!

To show you how all this comes together, some plans should make things a bit clearer: 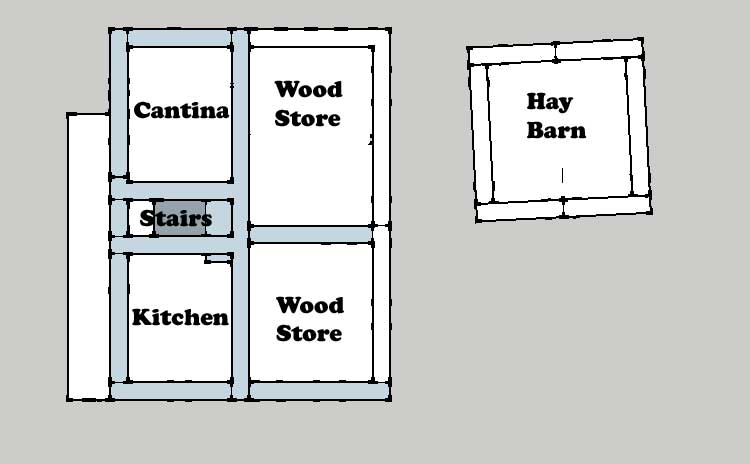 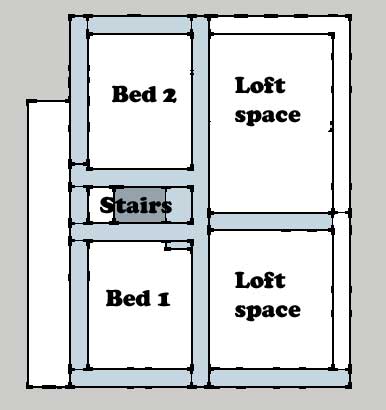 What we want to do: 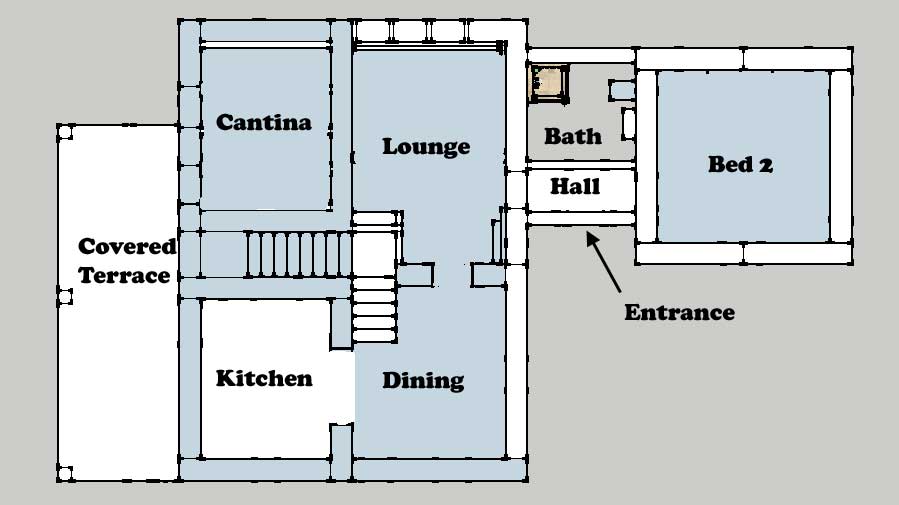 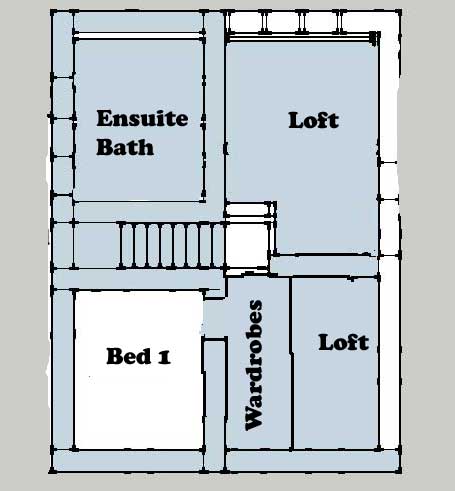 In Italy, all building work (unless classed as maintenance) needs to be approved by the local Comune similar to planning permission and building regulations in the UK. However, unlike the UK where we could draw up the plans ourselves and have the council building inspectors inspect our work, here we have to use what is known as a Geometra  (an architectural technician – similar to an architect, but who charges a little less and perhaps holds back on the creative flair of an Architect). In Italy we do also have Architects which may be useful for larger projects or for those of you who need an extra bit of creativity, or are living in a particularly sensitive area – they will of course charge more and may not necessarily provide a better service – it is a matter of personal choice. We chose to use a local Geometra as we did not require a fancy design and higher costs of an Architect – we pretty much knew what we wanted to do, so just needed someone to guide us through the planning process, and to provide us with a certificate on completion of the project. The Geometra’s role is to create the plans, submit them to the Comune, co-ordinate fees and oversee the building works before signing off the project on completion – much like an Architects Certificate in the UK.

It is extremely helpful and advisable to use a Geometra who has a good working relationship with your local Comune as here it is equally as important who you know as to what you know and they may be able to smooth over any issues that may arise along the way. We actually met ours one very foggy afternoon near the house helping out at a local rally car event – he was young, friendly and approachable and understood a little English. By some coincidence, he was also later recommended, or at least his Aunt with whom he works was, by a friend of ours. It also turned out that she had actually drawn up the plans for the house some 20 years ago when it was officially registered (although the house is at least 150 years old, many properties were never actually registered on local town plans). So with fate playing its hand, we had found a Geometra 5€ – Simone.

Being ‘unconventional’ as we are, our first hurdle before formally appointing Simone as our Geometra was to convince him and his family (his uncle also works with them in a structural / technical capacity) that we do know how to renovate a house and that we don’t want or need to employ a local builder. Difficult enough in your native language, but Simone speaks quite fast and slips in and out of abbreviated dialect – very similar to the Yorkshire version of English so I guess touché!

So out came the laptop with all our photos of past projects to demonstrate our credentials – it seemed to do the trick and after a few nods and raised eyebrows (especially at the photos of ‘la donna con la scavatore’ – Helen operating the mini digger we used for the house build), 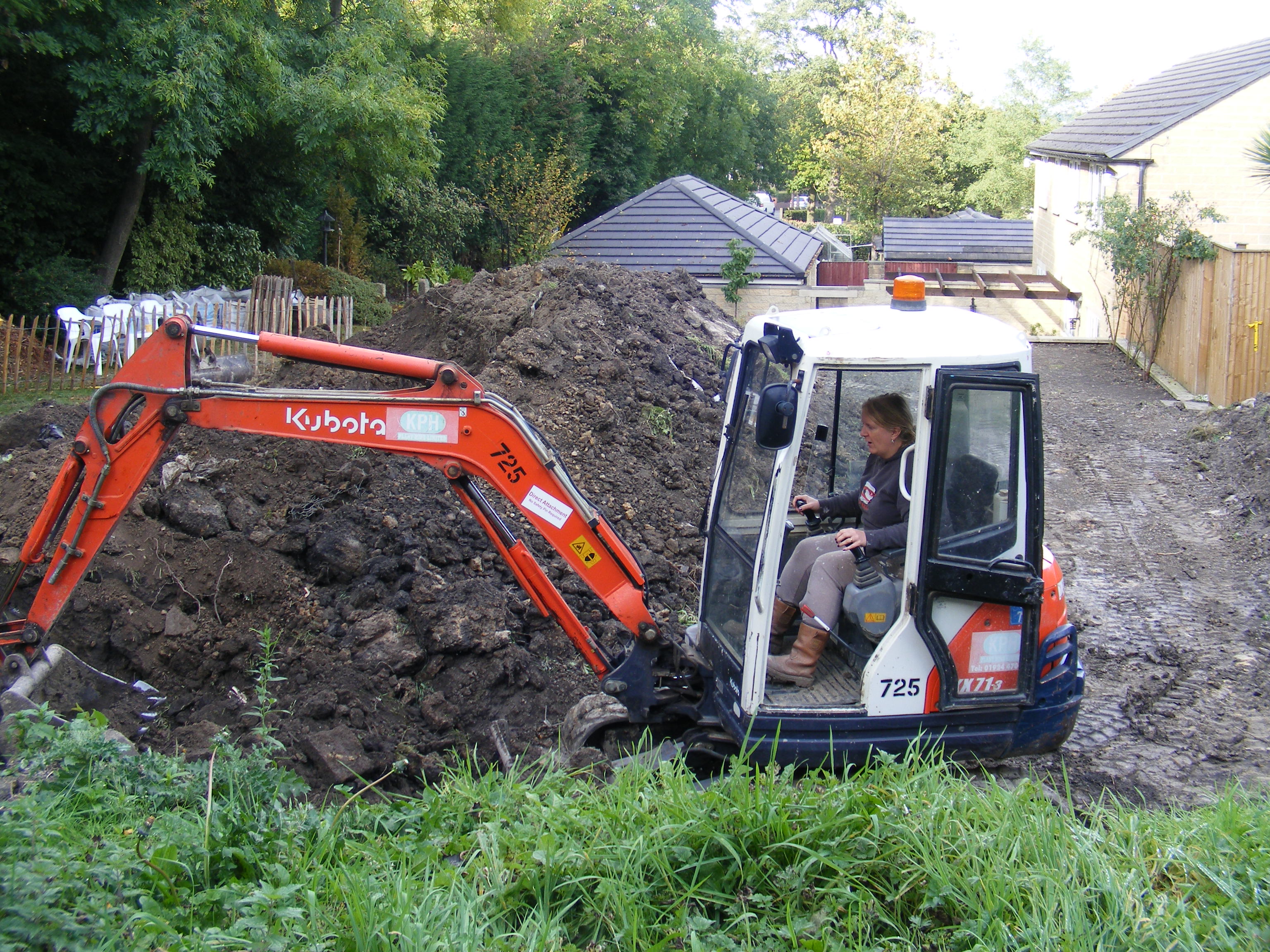 they all agreed we could do the work ourselves subject to our standards of workmanship being up to scratch. After that the conversation turned to food and wine and why had we chosen to move here etc. We left with a bottle of wine and a bag of tomatoes! – but more importantly for us, a Geometra we could work with and who had the patience to work with us!!

The Geometra oversees all the work for the project, but will liaise with additional experts where necessary – a geologist (Geologo ) being one of them. As we have no bathroom, we also don’t have any form of drainage – i.e a septic tank. (The internet provided us with a temporary solution to this problem whilst we are living in the caravan – ‘Humanure’. Without grossing you out too much, it is a method of composting human waste safely for use in the garden – don’t worry we won’t be putting it in the Orto!). 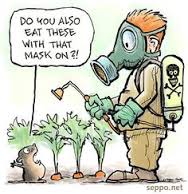 The problem when you don’t have an official septic tank (Fossa Biologica), is that of course you need permission, and any excavations by mechanical means or large holes in the ground need specific approval known as ‘Movimenti Terra’ for which you need a separate project and the expertise of the Geologo 6€ – it also takes a little longer for approval (an extra month for us).

A major expense of any project here and one not to be overlooked when converting buildings or creating new ones is a fee known as the Oneri 7€ which is a tax on change of use which is calculated on the square metres you want to create. And by the way if you want a covered terrace (Terrazza), which we do, this is also classed as new build.

There are two main ways of applying for permission for building works in Italy – major changes that will change the external appearance require full planning permission known as a DIA (Denuncia di Inizio Attività). In this case your Geometra will produce the plans, register them with the Comune and if, after 30 days, the Comune has not objected to them, you are good to go – similar to full planning permission in the UK, but you only get a reply if they don’t like your plans! The second type of application – a SCIA – is used for minor works – similar to a building notice in the UK whereby you advise the Comune of what you intend to do and start immediately.

Fortunately we live in a relatively relaxed area so, despite our project being classed as ‘major’ and requiring a DIA, our plans were not objected to and we are cleared for take-off! (it would not have been quite so simple in a historically sensitive area or national park!) Incidentally, if your house is within 150m of a river (or any water course for that matter), your plans will need regional approval, as well as from the local Comune which will take much longer – potentially years in some cases!

So after about 3 months from appointing our Geometra, we had all our planning permissions and were finally ready to start creating our dream home.  And with winter fast approaching, we had a couple of major jobs in mind … start the water works! 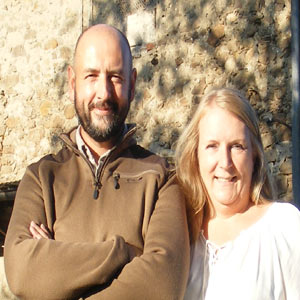 So why the Blog?

Ever wanted to renovate a property abroad but talked yourself out of it after struggling to find detailed information on how much it really costs and how to actually go about renovating in a new country? With a new life in Italy including a rural stone farmhouse to renovate, that is exactly where my wife Helen and I found ourselves in 2016. To find out more about our day to day lives and the challenges we face, follow Helen's blog at midlifeitaly.com, but stick with me here for a more specific story of the renovation itself. Our goal? ... to create a dream home in rural Italy on a seriously restricted budget, doing as much of the work ourselves as is legally possible. So why the blog? ... to share our real life experiences and hopefully inform and inspire others to follow their dream of renovating abroad!